Back to George Rowe

Entrance to the Valley of Rocks, Linton [Lynton].

Stretch/Pinch the screen to zoom

Lithograph of the Entrance to the Valley of Rocks, Linton [Lynton], drawn by George Rowe and "lithograph'd" by Mrs. [Philippa] Rowe.

This lithograph of the “Entrance to the Valley of Rocks, Linton” was created by Mr and Mrs Rowe in the mid-nineteenth century, likely as a piece intended for George Rowe’s 1835 “Scenery in North Devon” series. As the caption indicates, the print was published from his business premises in Cheltenham, where he ran a successful printmaking venture from 1832 to 1852.

George Rowe met his wife, Philippa Rowe [nee Curtis] in 1827, when he was teaching as a drawing master at Mount Radford College, Exeter. After a short time apart, they were reunited in Lynton, the inspiration for this later piece. The couple were married in Heavitree Church in 1828, and went on to have 10 children, one of whom they called ‘Vignette’ (a term which appropriately refers to a visual representation of a scene). According to contemporary accounts Philippa was a gifted artist in her own right, and after her marriage she continued to produce lithographs of equal quality to her husband’s, including this piece. After spending several years in Devon, during which time the Rowes collectively produced an impressive 177 views of Exeter, the family moved to Cheltenham in 1832. Still, Rowe appeared to look back upon the couple’s time courting in Lynton with fondness, and this image of the Valley of the Rocks attests to this sense of nostalgia.

The South-Western landscape clearly held its appeal for the Rowes throughout their life, and they were fortunate that there was a new contemporary appetite for images of Devon’s dramatic coastlines and seaside spaces. Formerly, the seaside and the rocky coastlines of the South West had been seen as dangerous and hostile areas, but in late Georgian England, increased travel prospects and innovations in print culture afforded such spaces an opportunity for a cultural rebirth. Moreover, the philosopher Edmund Burke’s concept of “the Sublime” (1756) had reframed areas with dramatic and difficult terrain as sites of curious beauty. An image of “infinity,” he argued, “fill[ed] the mind with delightful terror.” Here, the sheer rockface commandeers the left of the image, dwarfing the ship in the distance, and confronting the viewer with a sense of vast and non-human scale. Depth, choppy waters, rolling clouds and jagged precipices are communicated with expert draughtmanship. The peril and the poetry of the place co-exist. Indeed, though the poet Robert Southey had, in 1799, suggested the landscape formed “the ruins of some work erected by the devil”, by 1869 the Valley of the Rocks, (and its notorious feral goats), famously featured in R.D. Blackmore’s dramatic romance Lorna Doone, a novel so popular that much of Exmoor is now commonly referred to as “Lorna Doone country.” The work of the Rowes, prolific and detailed, was a creation of and a contributing factor to this new assessment of the Valley and the wider Devon landscape. Rowe returned to Devon in 1859, and spent his final years in Exeter. 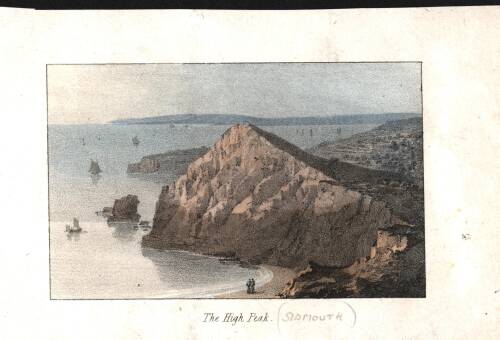